The country for this week is Cyprus.

Cyprus is Eurasian island located in the eastern Mediterranean, just below the Anatolian peninsula. It is the third largest island in the Mediterranean Sea.

Here is a map of Cyprus in relation to the Mediterranean Sea and other countries around it (click to enlarge):

Cyprus has long been a crossing point between Europe, Asia and Africa and still has many traces of successive civilizations – Roman theaters and villas, Byzantine churches and monasteries, Crusader castles and prehistoric habitats.

Since Turkey occupied the north of the island in 1974, the Turkish Cypriot and Greek Cypriot communities have been separated by the so-called Green Line. 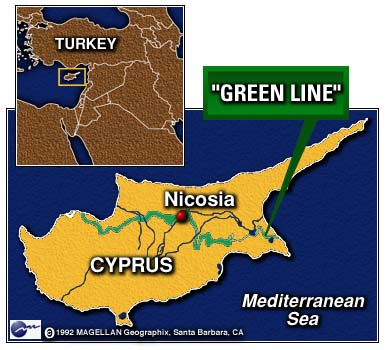 This is a map of the Green Line (click to enlarge):