This week the country is Bulgaria.

The capital of Bulgaria is Sofia.

This week - Bosnia and Herzegovina.

The capital is Sarajevo.


Bosnia-Herzegovina is recovering from a devastating three-year war, which accompanied the break-up of Yugoslavia in the early 1990s.

The 1992-1995 conflict centered on whether Bosnia should stay in the Yugoslav Federation, or whether it should become independent.

The country is home to three ethnic groups: Bosniaks (Muslims), Croats, and Serbs.

Croat and Muslim nationalists formed a tactical alliance and outvoted the Serbs at an independence referendum. Serb nationalists were incensed as the constitution stipulated that all major decisions must be reached through consensus.

International recognition of Bosnia and Herzegovina increased diplomatic pressure for the Yugoslav People's Army (JNA) to withdraw from the republic's territory which they officially did. However, the Bosnian Serb members of JNA simply changed insignia, formed the Army of Republika Srpska, and continued fighting. Armed and equipped from JNA stockpiles in Bosnia, supported by volunteers and various paramilitary forces from Serbia, and receiving extensive humanitarian, logistical and financial support from the Federal Republic of Yugoslavia, Republika Srpska's offensives in 1992 managed to place much of the country under its control.

Map of the territory of Republika Srpska (click to enlarge): 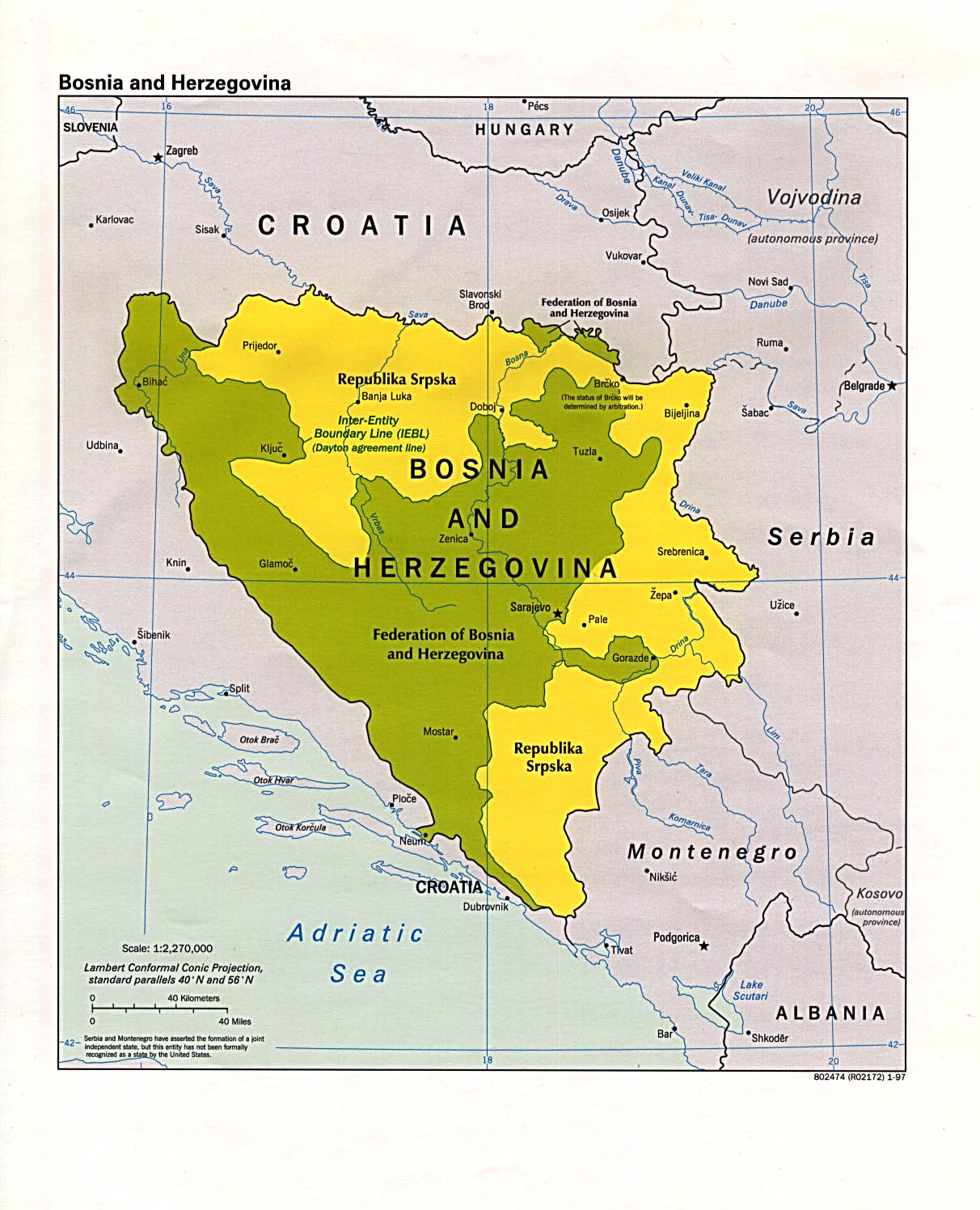 What happened in the weeks after the Serb offensive have since been described as the worst atrocity in Europe since World War II.

Ethnic cleansing and civil rights violations against non-Serbs were rampant in the areas under Republika Srpska’s control. DNA teams are still digging through the mass graves which were left as a result of the campaign. One single most prominent example is the Massacre of Srebrenica, ruled genocide by the International Criminal Tribunal for the former Yugoslavia.

UN safe havens for Bosnian Muslim civilians were created, to include Sarajevo, Gorazde and Srebrenica.


The Bosnian Serb army under Ratko Mladic seized control of the United Nations safe haven of Srebrenica after Dutch peacekeepers were forced to withdraw. Some 1,500 Serb troops overran the lightly-armed Dutch troops, despite two Nato air strikes on Serbian tanks inside the enclave. An estimated 8,000 Bosnian Muslim men and boys were separated from their families and massacred. Up to 30,000 refugees from the mainly Muslim town were reported to be fleeing to the north.

“When they opened fire, I threw myself on the ground. (…) And one man fell on my head. I think that he was killed on the spot. And I could feel the hot blood pouring over me. (…) I could hear one man crying for help. He was begging them to kill him. And they simply said "Let him suffer. We'll kill him later."

I was really sorry that I would die of thirst, and I was trying to hide among the people for as long as I could, like everybody else. I just wanted to live for another second or two. And when it was my turn, I jumped out with what I believe were four other people. I could feel the gravel beneath my feet. It hurt. (…) I was walking with my head bent down and I wasn't feeling anything. (…) And then I thought that I would die very fast, that I would not suffer. And I just thought that my mother would never know where I had ended up. This is what I was thinking as I was getting out of the truck. (…) I was still very thirsty. But it was sort of between life and death. I didn't know whether I wanted to live or to die anymore. I decided not to call out for them to shoot and kill me, but I was sort of praying to God that they'd come and kill me.”

The Serbs took large groups of men to warehouses and mowed them down with machine guns and explosives. Armed guards shot at the men who tried to climb out the windows to escape the massacre. When the shooting stopped, the shed was full of bodies. Another survivor, who was only slightly wounded, reports:

“I was not even able to touch the floor, the concrete floor of the building (…) After the shooting, I felt a strange kind of heat, warmth, which was actually coming from the blood that covered the concrete floor, and I was stepping on the dead people who were lying around. But there were even people who were still alive, who were only wounded, and as soon as I would step on one, I would hear him cry, moan, because I was trying to move as fast as I could. I could tell that people had been completely disembodied, and I could feel bones of the people that had been hit by those bursts of gunfire or shells, I could feel their ribs crushing. And then I would get up again and continue.”

The above quotes are from "Prosecutor vs. Krstic, First Judgement". United Nations. 2 August 2001.


Pictures of Bosnia and Herzegovina:

The country for this week is Belgium.

The capital of Belgium is Brussels.

For such a small country, Belgium has been a major European battleground over the centuries.

Occupied by Germany during World Wars I and II, it has experienced an economic boom in the last 50 years to become a model Western European liberal democracy.

However, there has also been a growing divide between the mainly Dutch-speaking north and the mainly French-speaking south, with some even speculating that the country could break up.

Map of the regions in which different languages are spoken (click to enlarge):